With a Grain of Salt 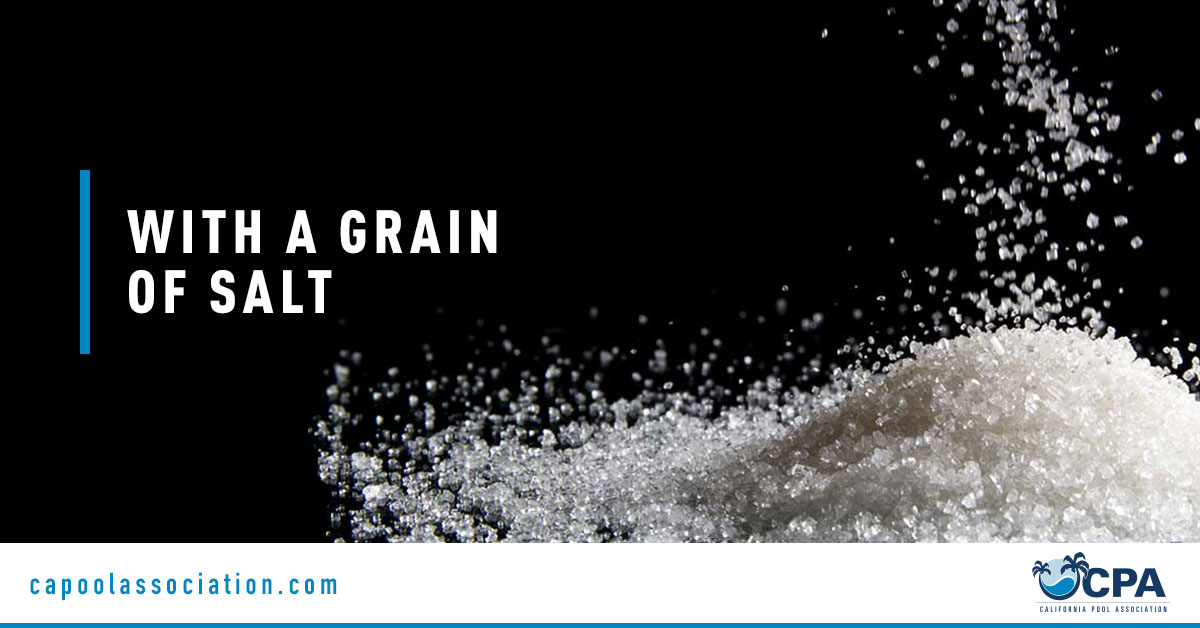 I want to start off by saying that I have been an advocate of saltwater pools my whole life. And the product has been a profitable one for my business. But I’m starting to wonder where the fizz went as I run into more and more skeptical customers. Ever since I was a kid hanging out at the Jersey Shore, I became aware of what happens to the human body and metals when they come in contact with saltwater. My back would dry out and tingle for hours, my sneaker eyelets would start to rust; I didn’t need a book or a chemistry lesson to tell me the benefits and disadvantages of salt, I could see them and feel them. But since moving to the West Coast last year, I’m noticing a shift in perception. What was once the new and innovative way to save your clients money and cut back on production of chemicals now seems to have lost its luster, pushed aside by newer and more innovative sanitation and oxidation methods that are less abrasive and easier to use. What once seemed poised to become the standard of the industry now seems to have acquired some negative connotations. It seems like every time I bring it up to clients in SoCal, it’s like I’ve said a dirty word. “Oh, no. My son told me about salt and how by next year I’m going to need all new parts for the heater. It isn’t worth it.” When did salt become a bad word?

Like most products, the salt discussion has always been about return on investment. You’re paying for the cell and the salt upfront, and you want the thing to end up making you a little bit of money on your chlorine bill. Which depends to some extent on geography. Years ago, when salt chlorine generators were more expensive, I figured they only made sense in the extended pool seasons of the South. When you are using chemicals for 12 months out of the year as opposed to only four or five months, the saltwater pool makes sense. In Florida, that initial investment your client makes will only take a few short years to pay for itself. But in the fleeting summers of the Northlands, that same ROI may take up to 10 years. Why even bother? As time went on, more manufacturers got into the game. The costs for salt systems dropped and salt began to make more sense at higher latitudes, finally reaching mine in New Jersey. I brushed up on my chlorine generation pitch and pushed, pushed, pushed those sales. It was an easy transaction, as all of my clients had heard of saltwater pools. I only had to explain to them that just because we were now adding salt, that didn’t mean we were “chlorine free.” My clients didn’t care; they lined up the moment we started selling. Little did I know I was causing myself a fair amount of grief. It quickly became apparent that the industry had not been manufacturing their heaters, pumps and filters with the salt chlorine pools in mind. The salt corrosion problem wasn’t quite so noticeable in my area due to New Jersey’s harsh winters, which cut short the lifespans of pool equipment anyway. Most of my customers were used to the concept of equipment replacement. Later, when I moved to California, I began to see another angle — how salt systems figure in the service business model on opposite coasts. When billing in New Jersey, everything was itemized, including chemicals. We charged for everything we put in that pool, and those chemicals were our biggest markup. But when I moved to L.A., I quickly realized that companies were charging an overall fee for pool service and giving away the chemicals for free. Free to the homeowner, that is; the cost of chemicals comes out of the company’s own pocket. Either way is fine, but it has an impact. As a pool consultant who practices preventative maintenance on all of my accounts, I’ve noticed the words “want” and “need” start to change when the cost of chemicals is coming out of the company’s pocket instead of the homeowner’s. Instead of, “How much do I need to put into this pool to get it into its ideal range?” it’s “What is the least amount of chemical I can put into this pool to keep it from going green?” But more to the point about salt systems — a salt chlorine generator on a West Coast all-inclusive service package is saving the pool guy money, as the chlorine it generates is chlorine the service guy doesn’t have to pay for.

I know things are changing in this industry, and although I know the salt chlorine generator was invented decades ago and has been a top selling piece of pool equipment for many years, customers are still trying to judge whether the benefits are worth it. Just for myself, working here in Southern California, I’d love to sell salt and not have to keep buying chemicals with my own money. But I’m running into some resistance.